Is it really almost July?! This is insane. It seems like just yesterday I was celebrating my BQ and now it’s time for fireworks. 2013 is literally going by in a blink. Let’s get caught up, shall we? 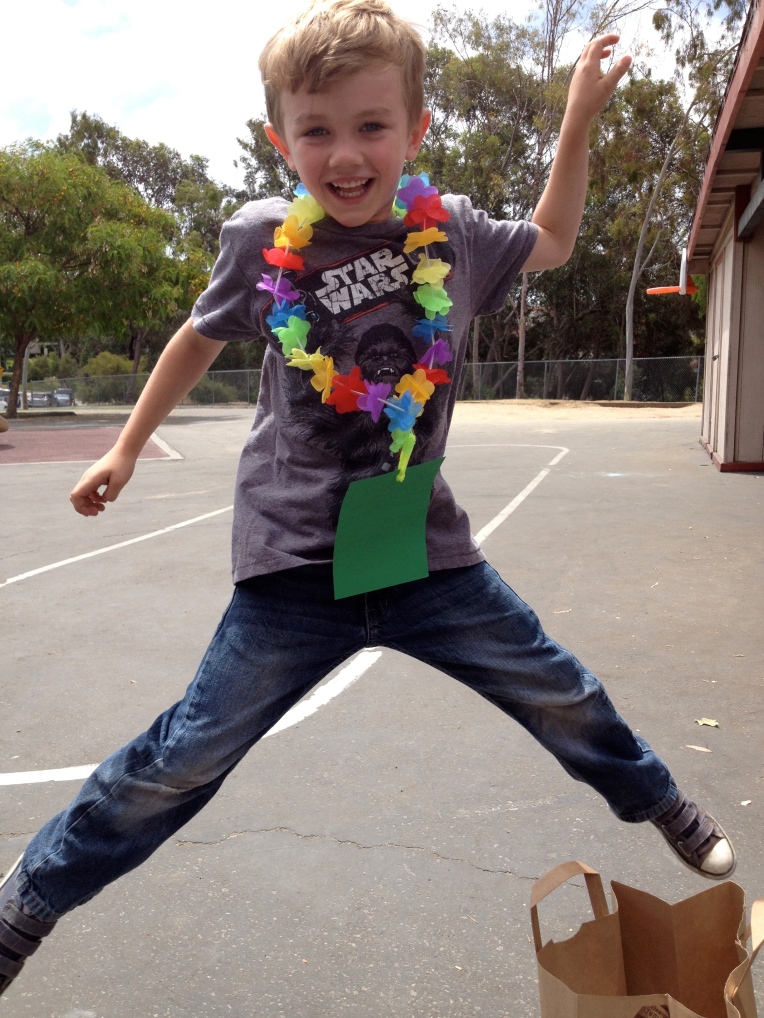 My big man graduated Kindergarten. I was so glad that I got to volunteer during his last week of school! 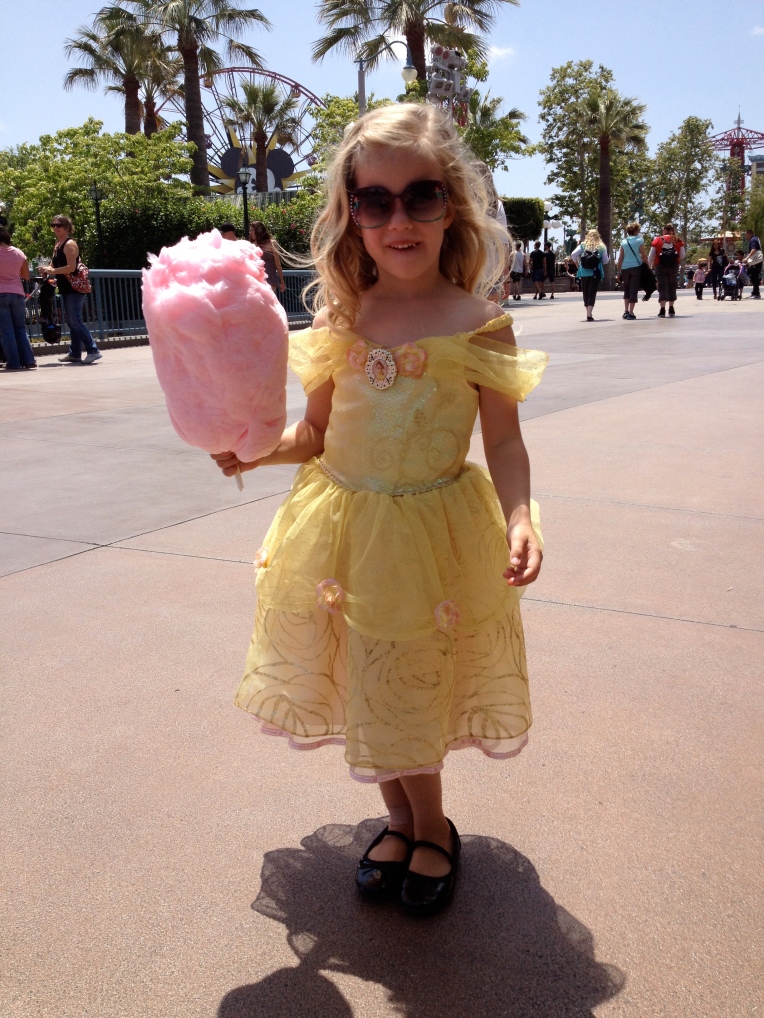 Mini me moved out of the “little kid class” and will officially start Pre-K this fall. So we had a girls day at Disney to celebrate. Bring on the cotton candy…and coffee… 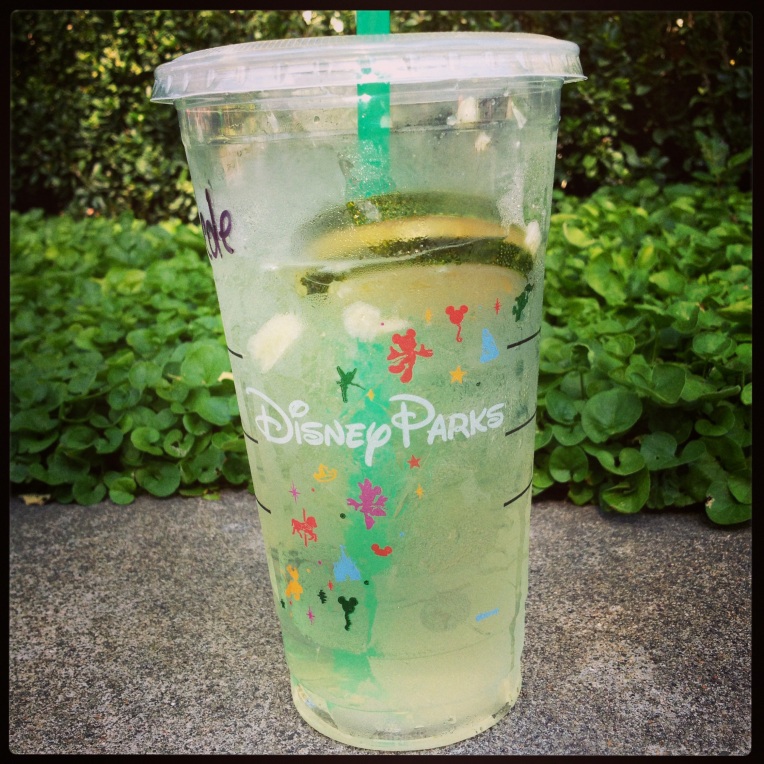 California Adventure earned my love ever since they opened Starbucks.

My FIL came for a visit! It was so good to have him here. We hadn’t seen him since Mama Kay passed so it was NEEDED. 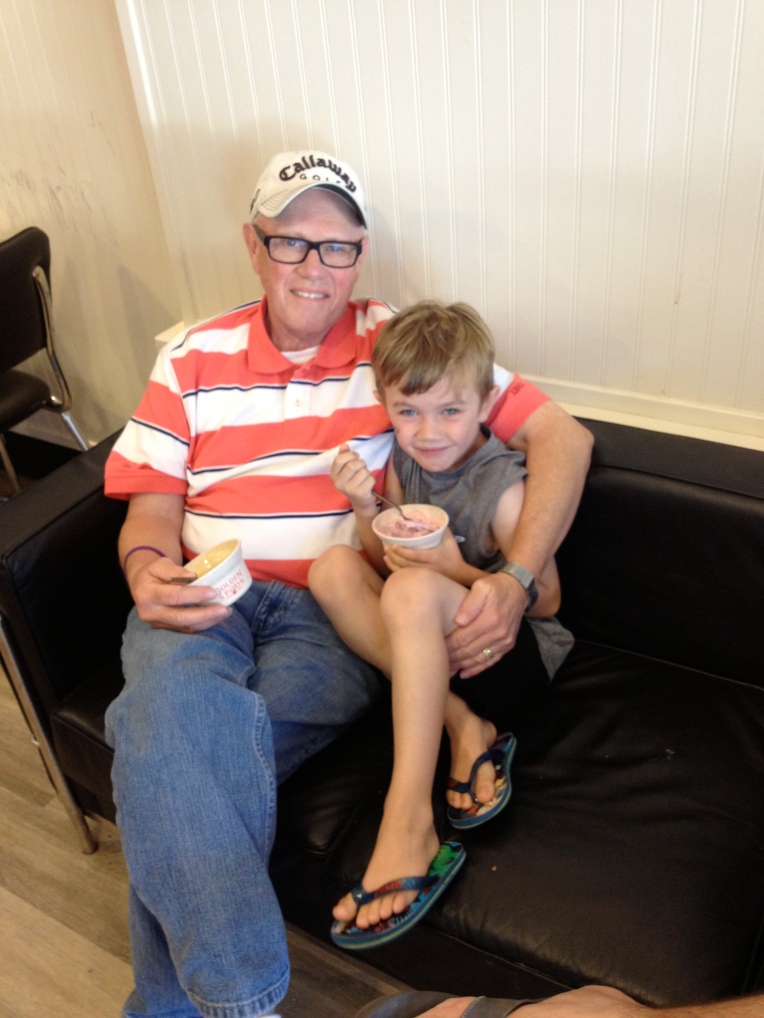 This is my first summer home with the kids. Man, it is so much fun! I am bummed that I missed out getting to do this when they were babies, but I feel so lucky that I am getting to do it now. Focusing on the moment and enjoying it. 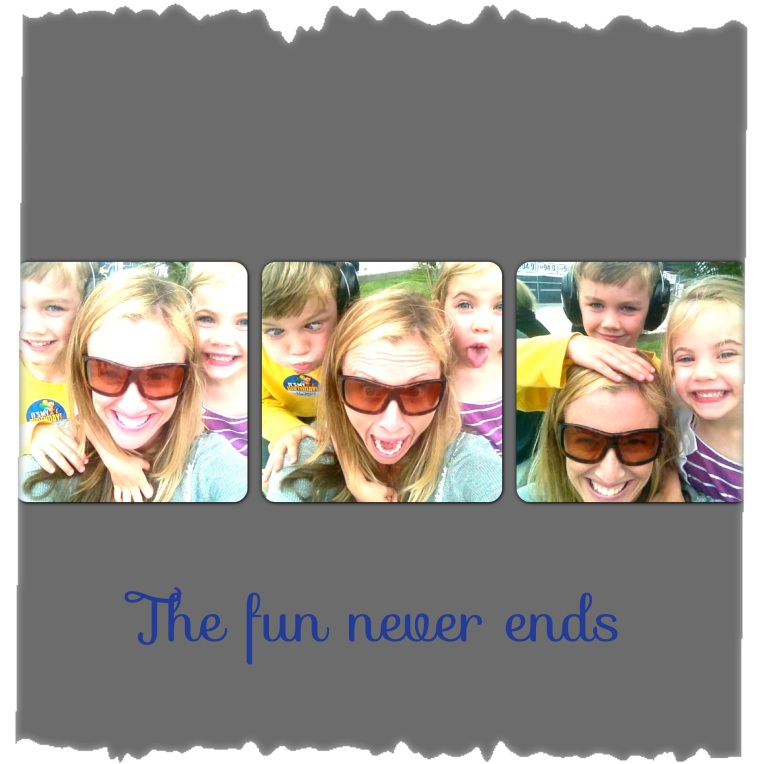 I started training with my brother who will be running his first marathon at Long Beach in October. He has finished 2 half marathons but since then has lost more than 80lbs! YES 80! 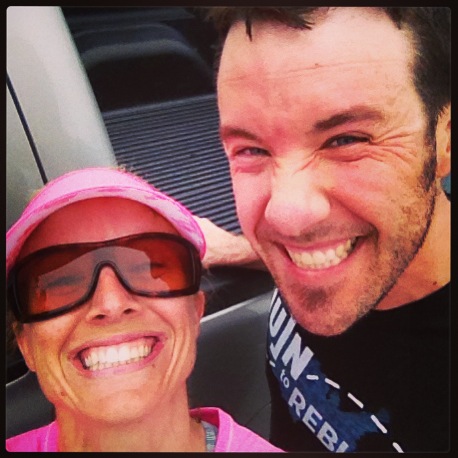 Isn’t that incredible? We will be getting into double digits this weekend and I’m sure he is REALLY looking forward to me yapping his ears off for hours on end. What?? Good convo makes time fly. 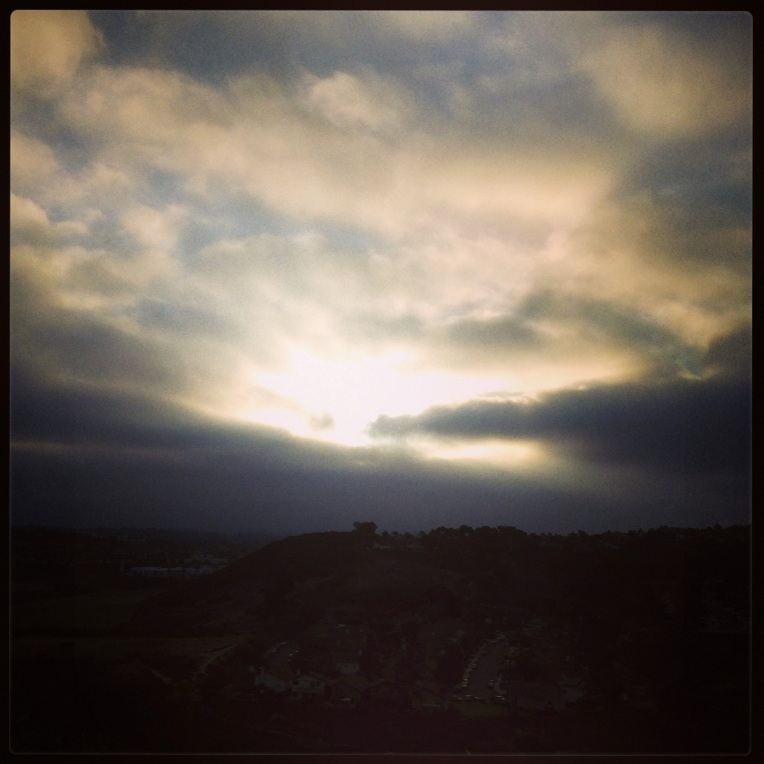 This was the view during a sunrise run this week. Stunning. This is one of the many reasons I love BCOD runs. So quiet and so beautiful. 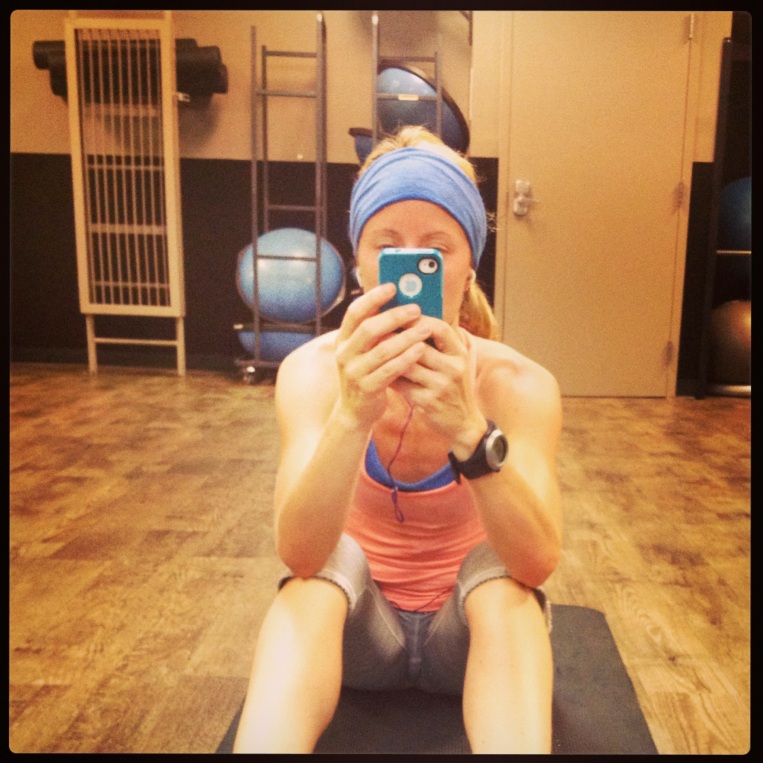 I’ve gotten back to including strength training in my weekly routine. While I never totally cut it out I did have to scale back during marathon training due to time constraints. It feels so good to feel strong again. If you follow me on Instagram or Twitter you know I love to hashtag #dowork. What you put into it is what you will get out. Keep a log.When things aren’t going the way you want them to look back at your training and see where you need to adjust.

I am running a 15k on the 4th of July (one of my favorite races) and then will have a month off until the Giant Half. Pretty excited for that race. I am bringing the eye black back. Oh yes, it’s happening.

What are your plans for the 4th? Anyone else running?

– I will definitely be sporting the Red, While and Blue!

Ahhh one last thing before I take off.  I want to leave you with this quote from my pastor. It really hit home for me and as we head into the second half of the year I want to encourage you all take a moment to reflect. Remember what’s important- it will make each day a whole lot easier 🙂

A week late but here it is. This eye injury is bothering me more than I thought it would (we can discuss later).

Beings that this race was one week after M2B I wasn’t expecting to run as well. I just wanted to go check out the new course and see if this was an event worth running again. If I ran well great, if not no big deal.

I got up around 3:20 a.m. and was able to catch a 4 a.m. train down to San Diego. I thought I would be one of the only peeps at the coaster station that early but to my surprise it was pretty busy. I ended up seeing a friend that I used to work with so we chatted the whole way down to SD. The train ended in Old Town and there was a shuttle waiting to take us to the start. It was seriously so easy.

The starting area was buzzing! From runners to coaches to supporters there were people everywhere. Bathroom lines moved faster than expected, got my bag checked and headed to the start line. 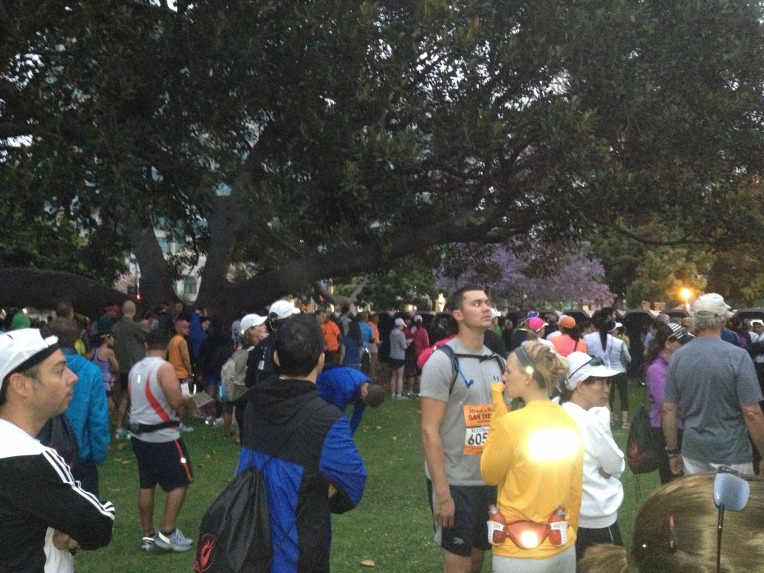 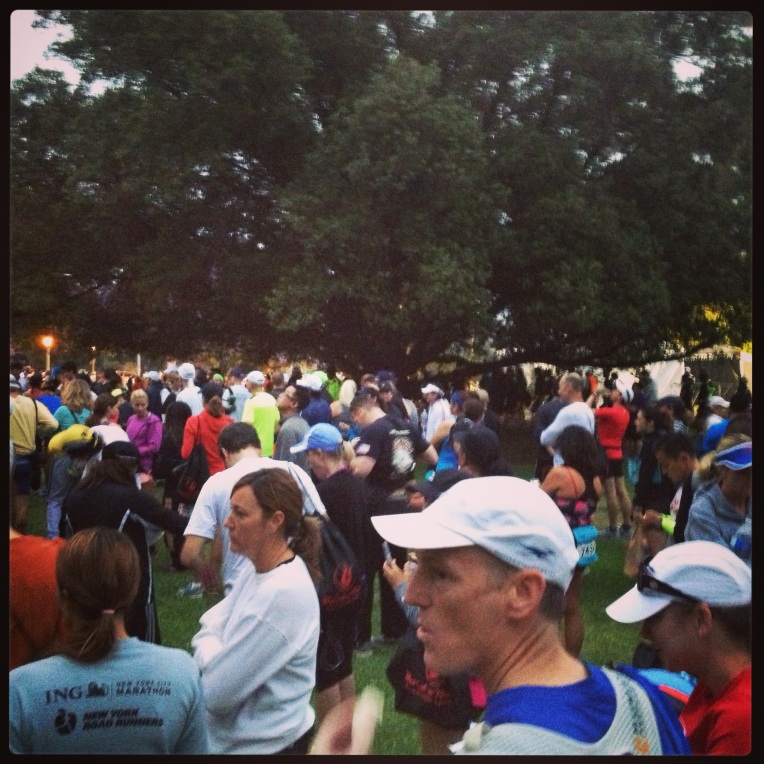 I ended up in corral 5 next to the 2 hour pacer. At that point I had to make a decision to either just chill and go with the crowded flow or expend energy and go out fast to get out of the madness.

I think it took 4 minutes to cross the start and we were off. Dude, it was CROWDED.  At that point I went with the decision to just go out fast. For the first mile I just tried to focus on getting through the crowd. I knew the street opened up around 1-1.5 miles so I would get some room to move. I remember passing the 1:45 pacer and knew I should probably put the brakes on a bit. That’s when I met Juan Fernando (John). This dude was freaking fast and there was no slowing down.

He was visiting from Mexico and spoke very little English. He asked if I understood Spanish and I said yes. From that point on he spoke to me in Spanish and I replied in English (or Spanish if I could). It was awesome. As we climbed a few short uphills we talked about races, strides and pacing. Around the 10k mark he told me he was gunning for better than a 1:36. He started in corral 3 so he had time to make up. At that point we were running 7:15-7:20s and I told him my brain was not ready to run better than a 1:36 and off he went.

Around the 15k mark we had another sneaky uphill that I just didn’t have the energy for. I made it up and over but at that point my mental state was just hang on. We hit some really fast downhills that I didn’t take advantage of but it did feel good on the legs.

As we made our way through downtown I heard the winner of the marathon finish. That was awesome. As I passed mile 13 I sprinted toward the finish. My last .10 was at a 5:43 pace (goes to show you I had a lot left physically, just not mentally!).

When I crossed the finish I took a quick picture and silently celebrated my 1 min PR. One week after a marathon PR I pulled a half PR out of my hiney. Awesome. I saw my new friend Juan and he showed me his Garmin: 1:35! He said he couldn’t believe it and I told him I knew he could do it. He ran a strong race!!

I grabbed my goodies and medal and headed to bag check to grab my stuff. I quickly changed my clothes and hopped on the trolley to get back to the train station. 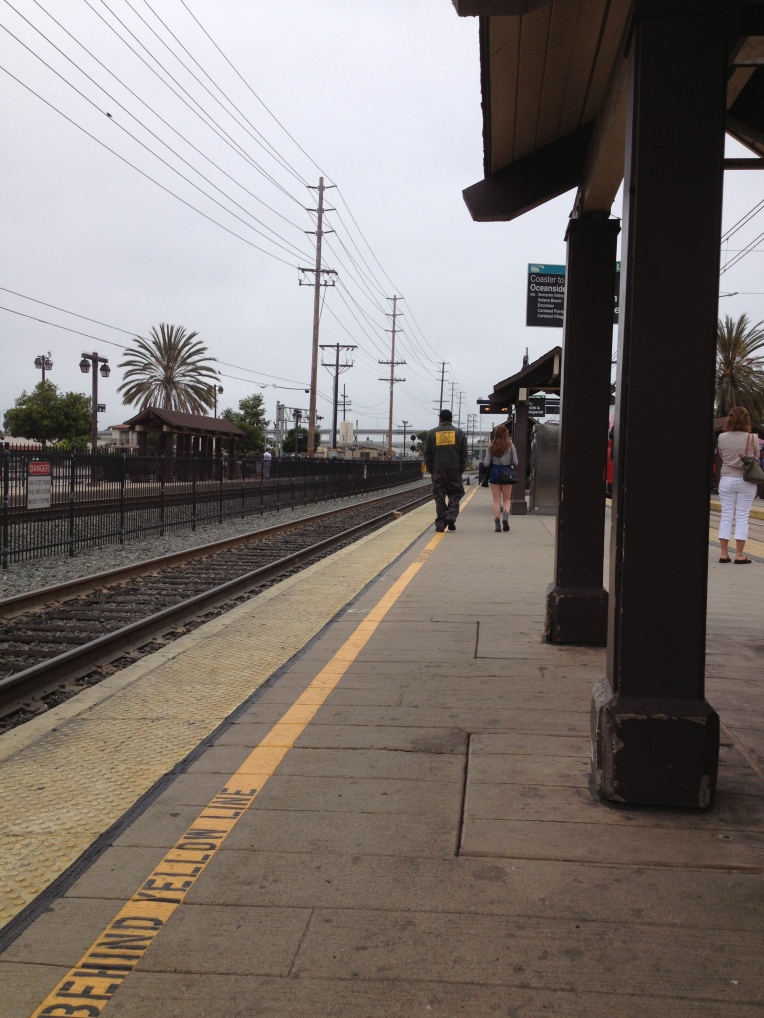 The finish line was super organized and easy to navigate. I had no problem grabbing my stuff and getting out of downtown. I’ll do a race review this week but I will say now that this year was a HUGE improvement for the half! HUGE!

I’m looking forward to race downtime for a few months. I will likely run on the 4th of July but next half isn’t until August. Time to just go back to running with no plan for a few weeks and just enjoy the scenery. With one eye. So ridiculous. Welcome to my world.

Anyone else run the new half course? Thoughts?

–  I loved the downtown finish!

RNR Expos are pretty darn big. So big that the best place to hold SD’s is downtown at the convention center. 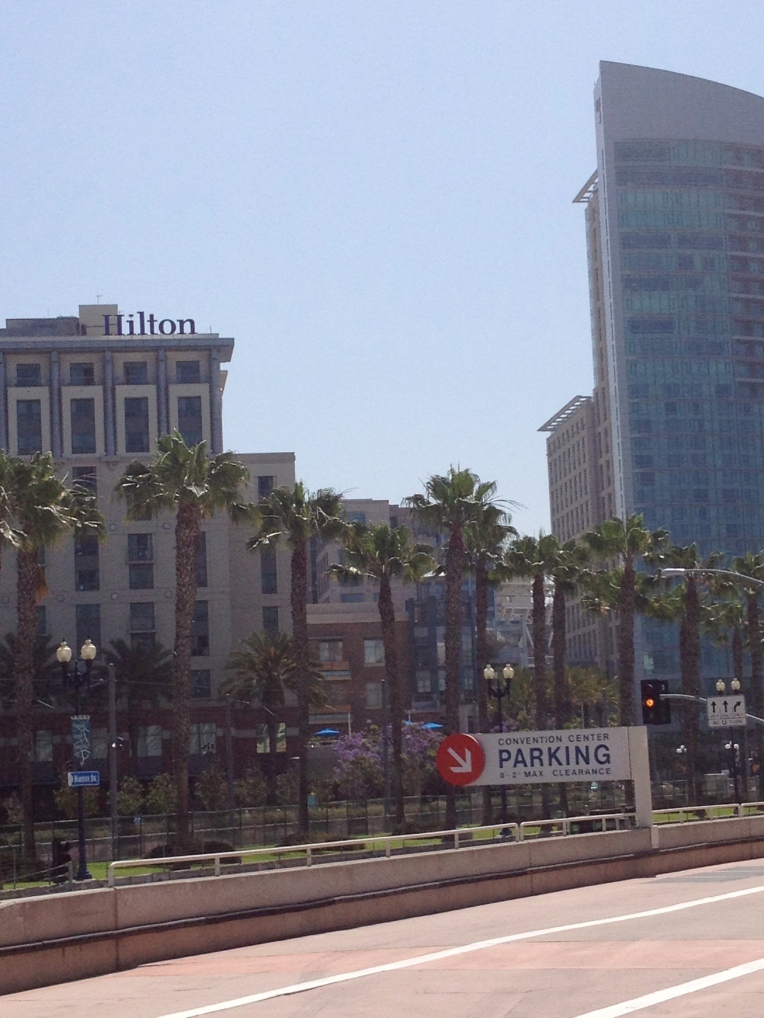 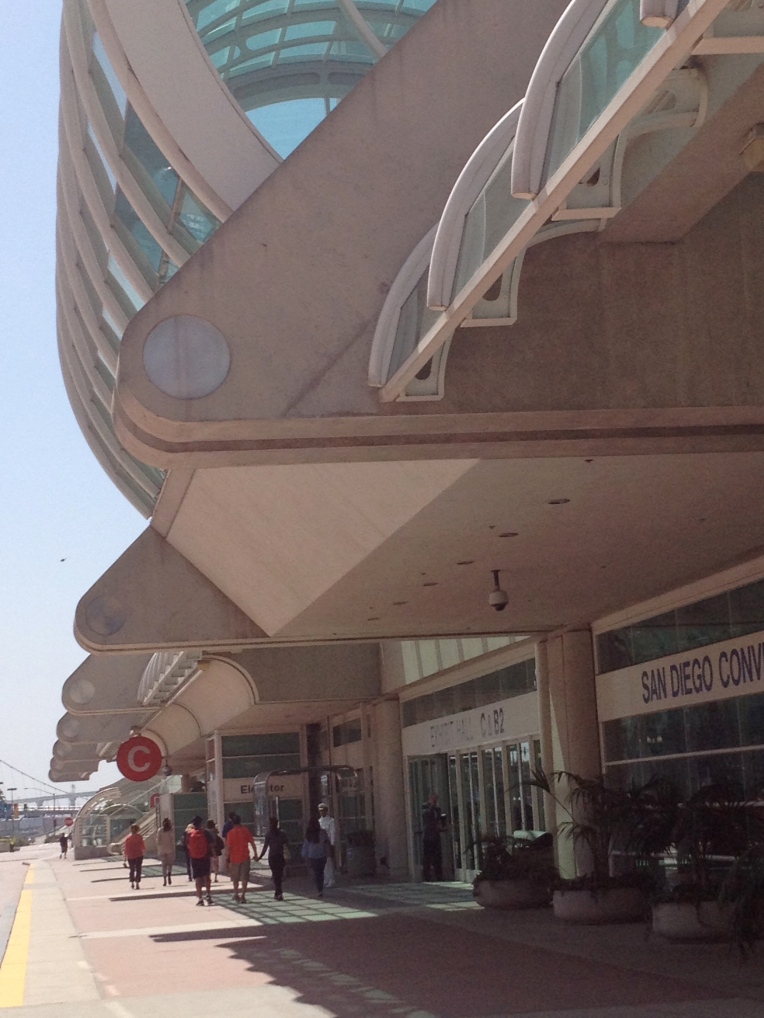 Beings that San Diego draws 30,000 runners plus spectators I went yesterday to try to beat the crowd. To my surprise when I walked inside the wait to get in was 10 minutes!

I don’t think I have ever seen people line up to get into an expo. Once the doors opened it was quick moving and I picked up my bib and swag bag in no time. 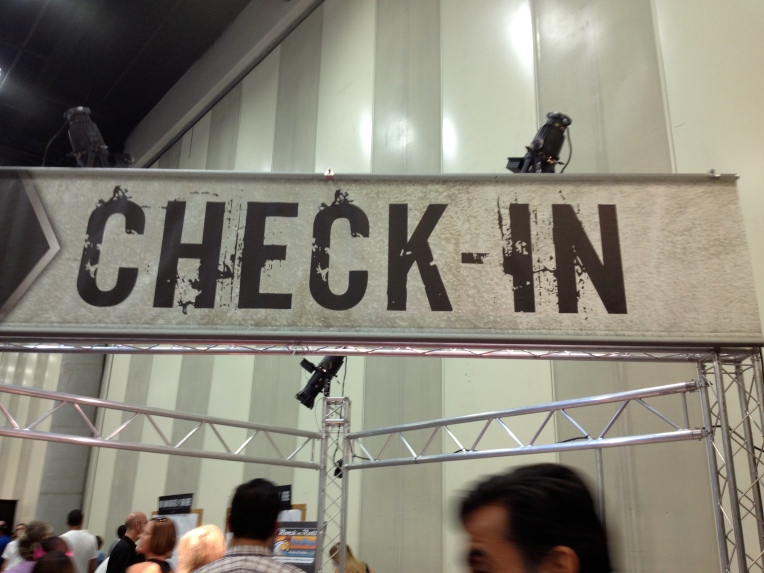 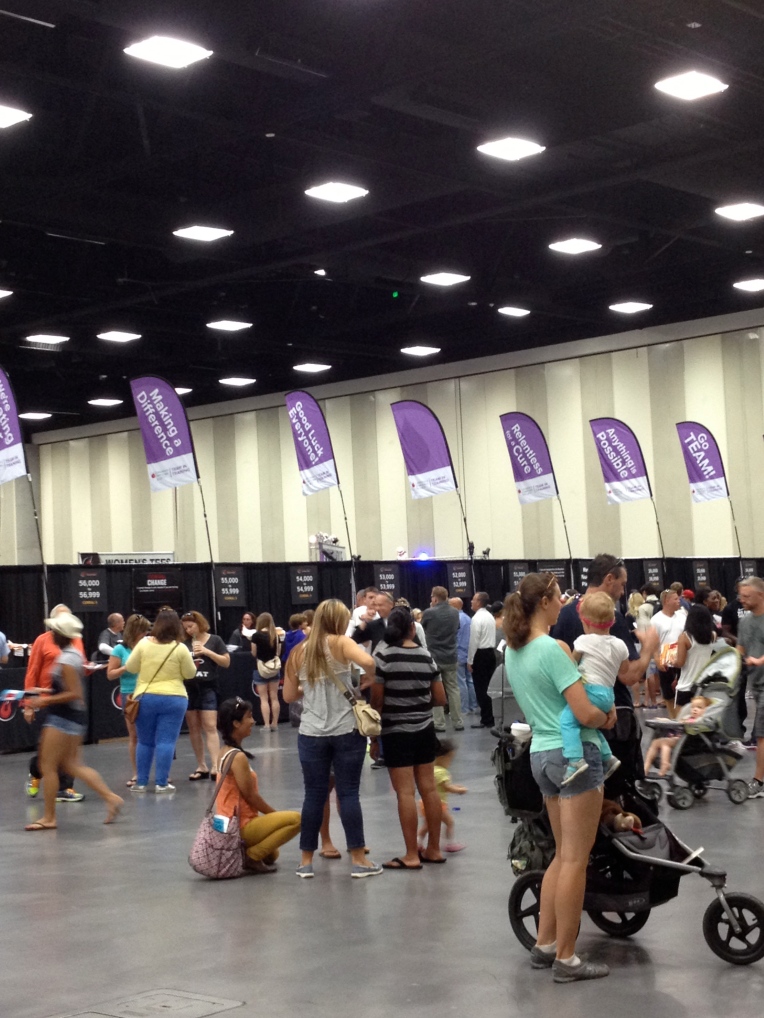 It is awesome that RNR is showing support for Run Now! If you have not heard about the countrywide race and fundraiser for Boston go check it out at RunNow.com. 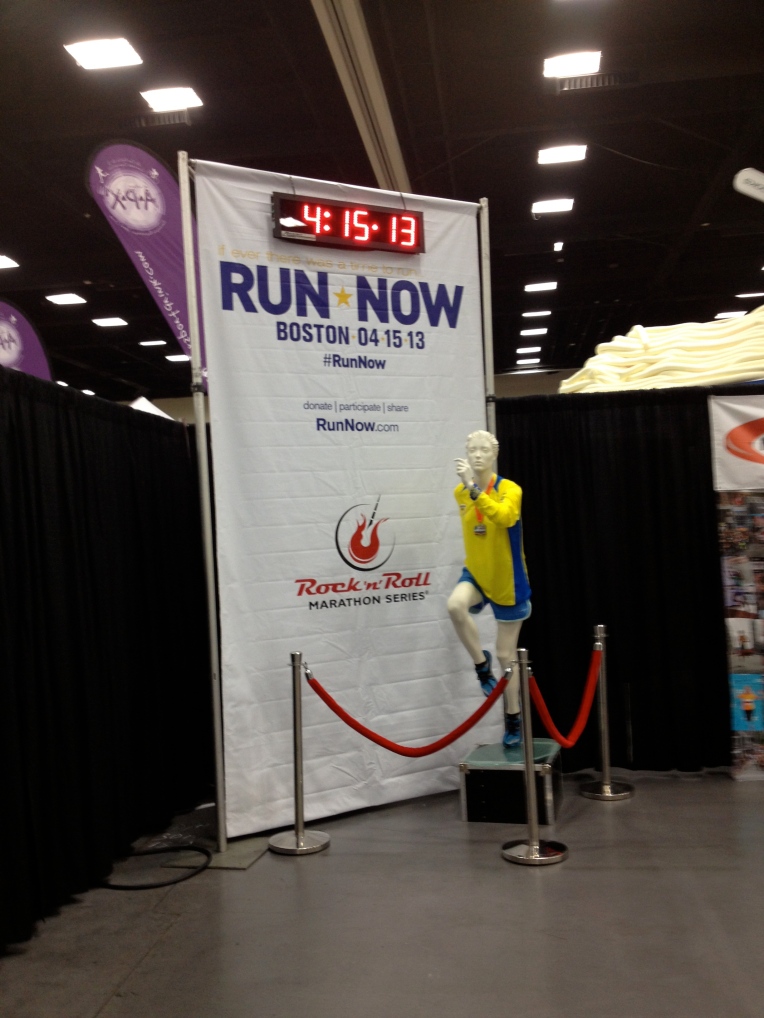 The rest of the expo was filled with vendors handing out everything from gels to snap peas to organic bread. Sometimes Expos are like Costco for runners. 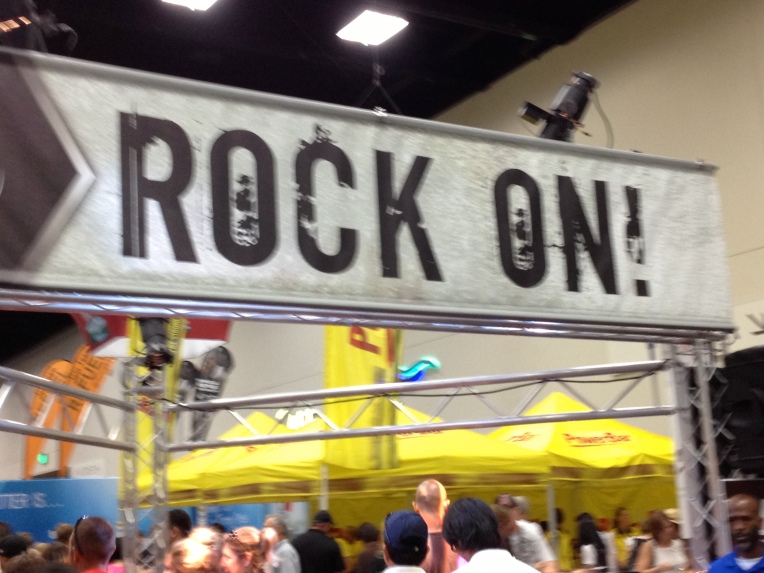 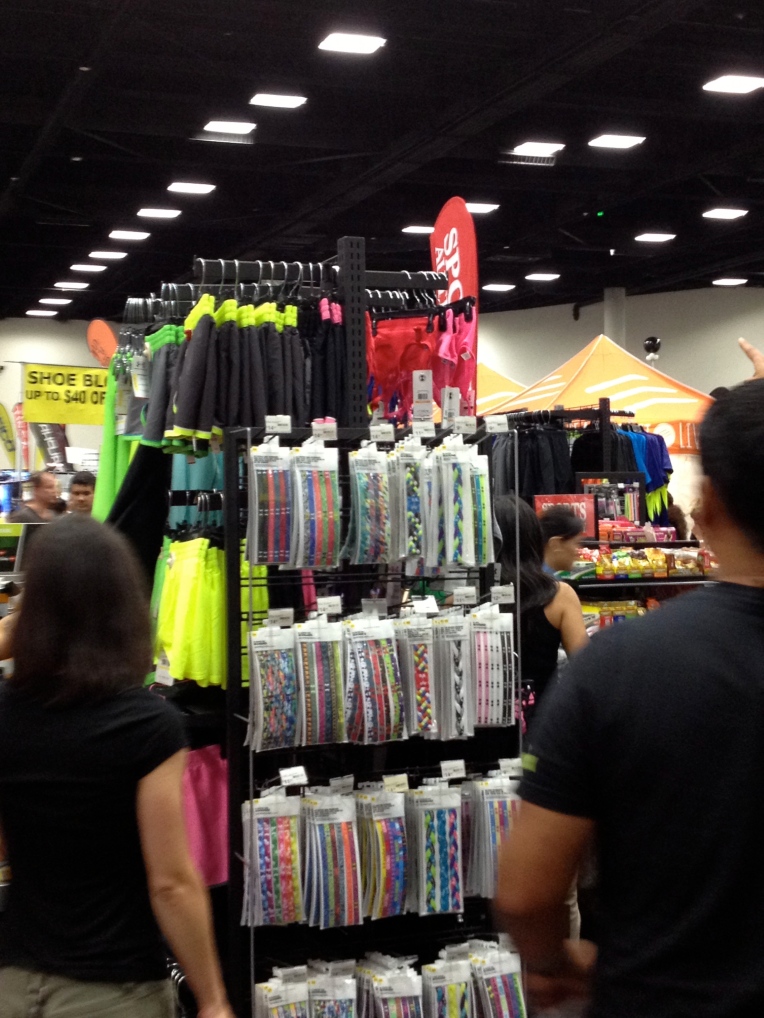 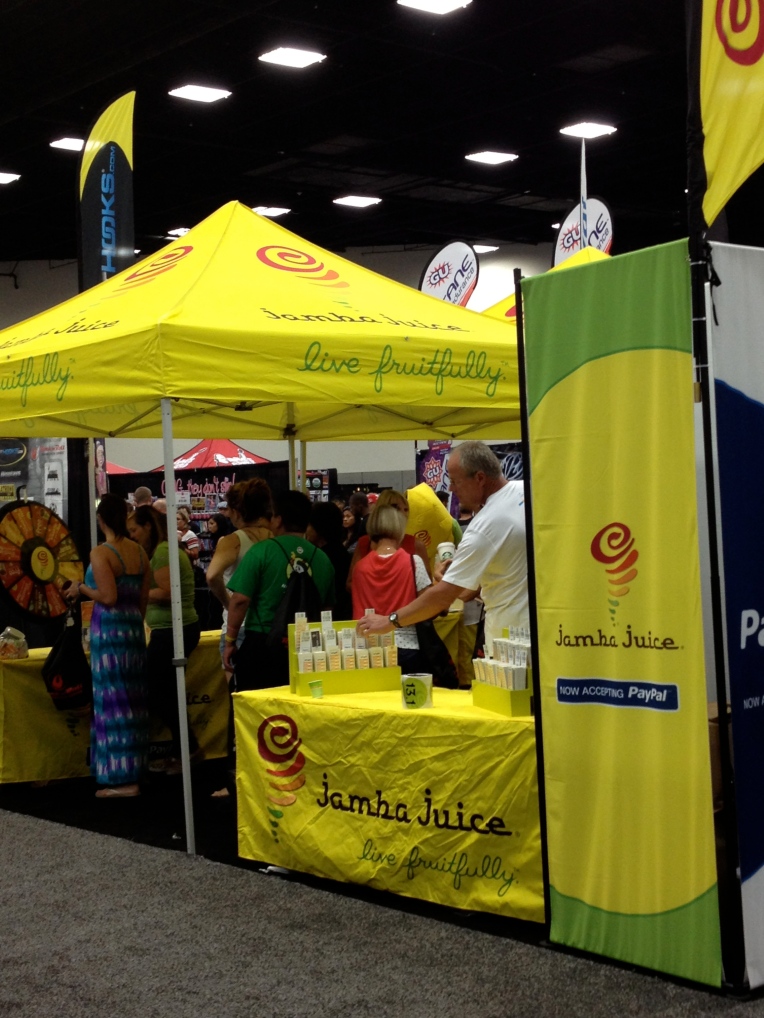 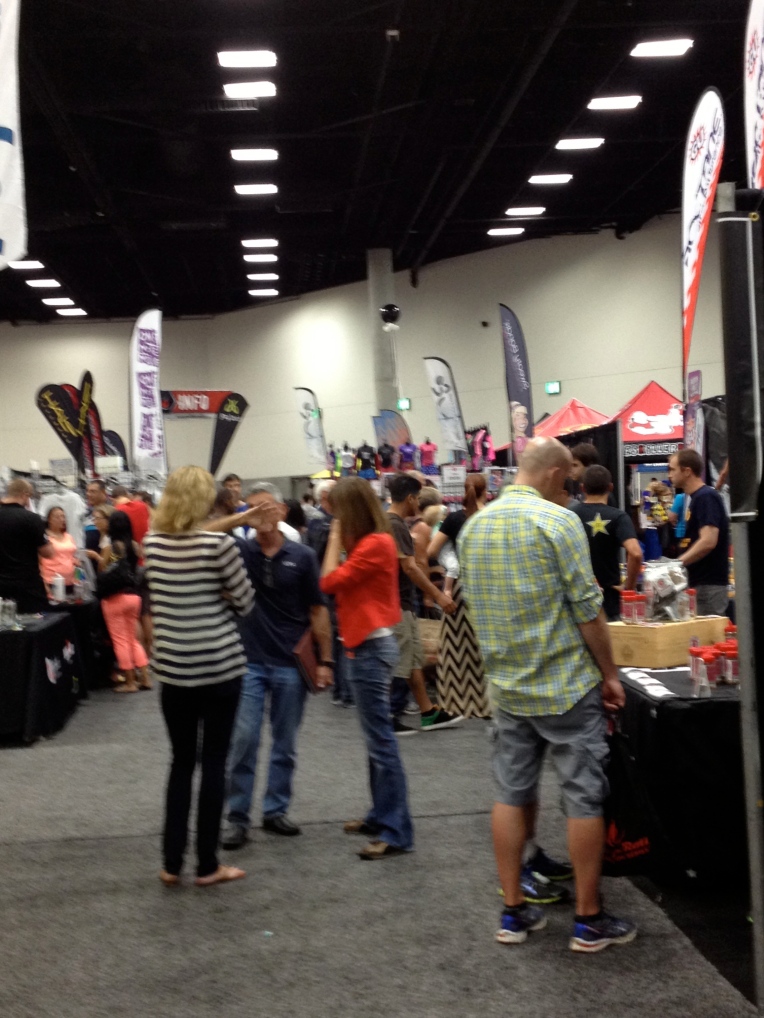 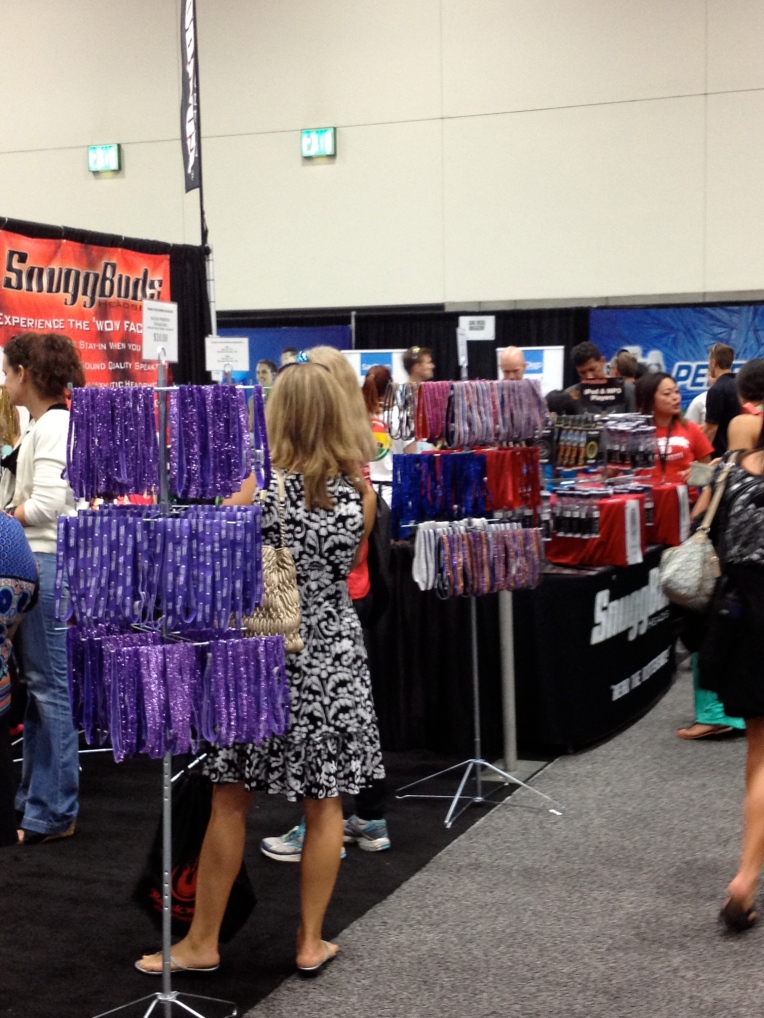 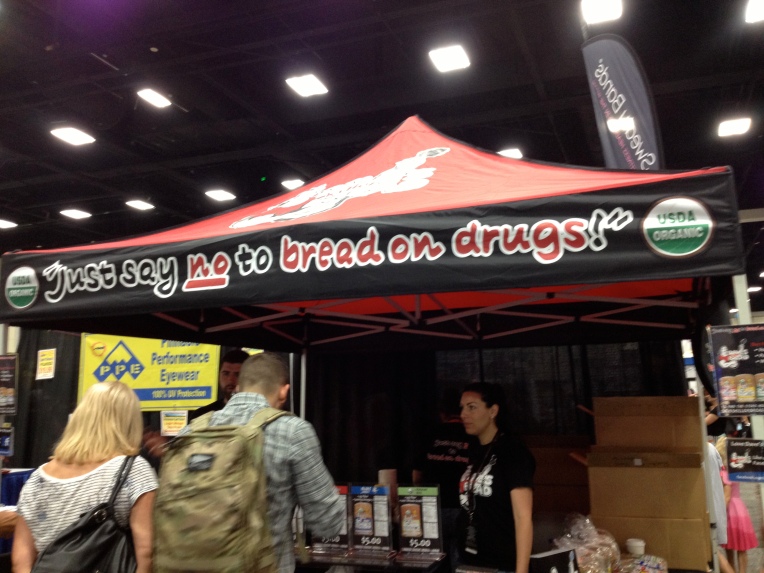 I zipped my way through and thought overall the expo was well organized and had a lot more giveaways than the previous years.

If you are headed there today you will have a few options as far as parking is concerned:

*If you are staying at a downtown hotel walk. Most hotels are within close proximity- don’t let maps fool you. Don’t move your car from your hotel parking garage.

*Parking at the convention center is $10. If you are into convenience and don’t have patience this is your best option.

*Metered street parking. If you take Island St. North past the stadium you might find more spots. The closer you try to park the harder it will be.

*Public Lots. You may be able to find a $5 lot on 7th or 9th and Broadway. Sometimes you have a drive around to find the best deal.

Keep in mind the Padres are in town. The game tonight is at 7:10 so the earlier you go the better.

If you still haven’t registered it’s not too late! 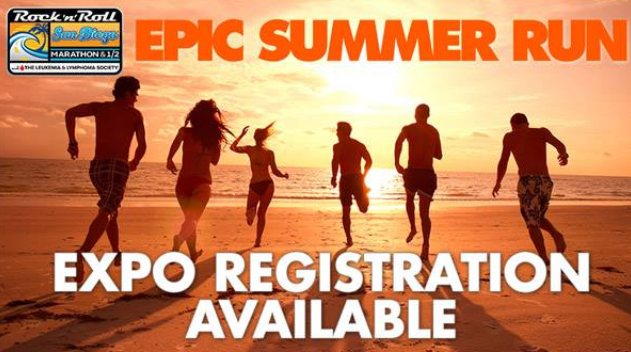 See you tomorrow at the start line!