We moved from the start to meet SR at exchange 1. It was still overcast and we were hoping the weather would stay that way. We were following our 12-person team on Twitter and they had mentioned that the heat was bad inland. Shoot. If we could have brought the beach weather with us we would have. 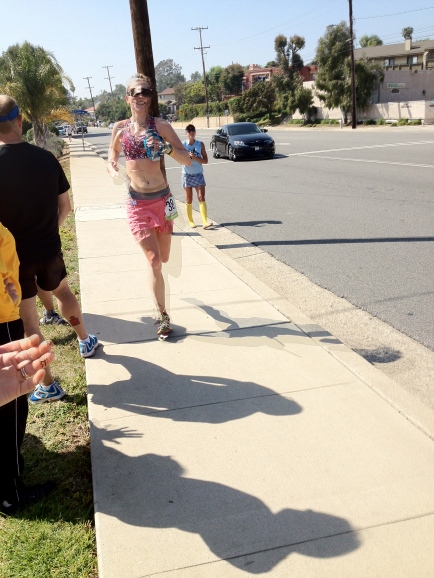 SR finished her first 2 legs strong running a 7 min pace. The sun was breaking through and we could feel it getting hot. You know when you can feel the sun radiating off of the sidewalk? That kind of hot. Crap. At any rate, SR was done and OUAL took off for her two hilly legs. We hopped into the van and move to the next check point. We did this point to point transition for each runner on our team. We  would sit and chat and wait for the signal that our runner was coming through. We would cheer, offer water, ice, gels, whatever. SR was doing toe-touches and jazz hands. It was awesome. OUAL ran strong in the hot weather. It was not easy but she killed it.

Margot was runner 3 and had to battle not only the heat, but major hills and lots of stop lights. If you are a runner you know that any one of the three can be a spirit breaker. She was tough. She might have cussed out the trees at exchange 6 where she finished but, hey,  they might have deserved it.  Chiara followed her (runner 4) with again a hot, hilly run. I remember at her first exchange (we ran two legs at a time) someone handed her a cup of ice and she opened her sports bra and filled it up. That’s how you cool the girls down. HA!

By the time Chiara finished the sun was going down. We all put on our safety gear and Pam (runner 5) took off. I knew I had about 1:20-1:25 until it was go time so I just sat quietly, waiting. Pam’s hubby had brought Pizza but I couldn’t eat. I knew that cheesy deliciousness would not mix well with hills. 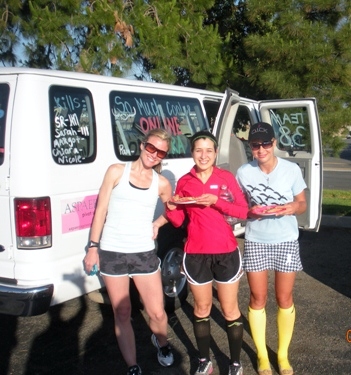 Before I knew it Pam cam cruising in, slapped the bracelet on me and I was off. It was freaking dark. No street lights, no bike lane, no sidewalk. I am a wuss and my imaginiation was running wild. What’s that sound? Is someone hiding out in that grassy field. I’m going to get kidnapped and noone will know! Run faster!! I took off to endure 10ish miles uphill running against traffic. I sorta wished I would have asked someone to run with me but by the time I thought about it I was 3 miles out. I had on a super bright pink vizipro longsleeve, headlamp, vest and taillamp. By god, if a car didn’t see me then the driver had to have had his/her eyes closed.

I remember feeling like the hills were dominating me instead of me dominating the hills. That’s never a good sign. I was breathing crazy and looked at my Garmin and saw 8:35. WTF? Why does 8:35 feel like 6:35. Eff. I am so screwed. I started talking to myself outloud “Go faster, your team is depending on you!” then I started singing outloud. There was noone around me so why not. I made it through the first leg and saw my team. That was so awesome! It gave me a little mental boost that was much needed. Plus it confirmed that I was going the right way, ha! I probably should have had a gel (I had not eaten a whole lot) but powered through. My average time to finish 10 miles in a race would be around, I don’t know, 1:16 ish. Good grief people this leg ended up being 10.11 miles in 1:28 (8:42 pace). I was pissed. I don’t know the last time I ran that slow (no offense to anyone, I do not think 8:42 is an awful pace. It just stings the ego when I had just busted out a 7:25 pace on a 25k 3 weeks ago). My heel was throbbing and I didn’t care. I was so mad that I had slowed us down. I just remember telling the girls that I thought it was hard, smiled, changed my clothes in a porta-potty in the dark (ewwww)and made my way to the back of the van. Ibuprofen? Check. They told me I did great but, like most people, I am my own worst critic.

At this point SR had taken off on a 19 mile adventure into the night and I had time to get over myself and suck it up. Being around all of the girls made everything so fun! I needed to STFU, adjust my attitude and enjoy this time with my friends. We cheered each other on and took on an all night running journey.  We were on a mission to catch a few teams. At 9:30 pm we had no idea how hard this race was about to get…we needed to lay the hammer down. But first we had to find it.