I promise this will be my last chat about the SD Half. While I am still grinning from ear to ear it’s time to regroup and get ready for upcoming races!

The Expo took place on Saturday March 10th. It was held at Petco Park in downtown San Diego. I got there at 9 a.m. and  found parking in a $5 lot across the street from the ball field. Most lots in the area were charging $10 which I thought was absurd. There was also metered street parking available.

The expo had all of the typical booths (Lara Bar, Gear, Compression Socks) but it just felt cooler than the typical packet pickup. This is because each booth lined the stadium walkway. 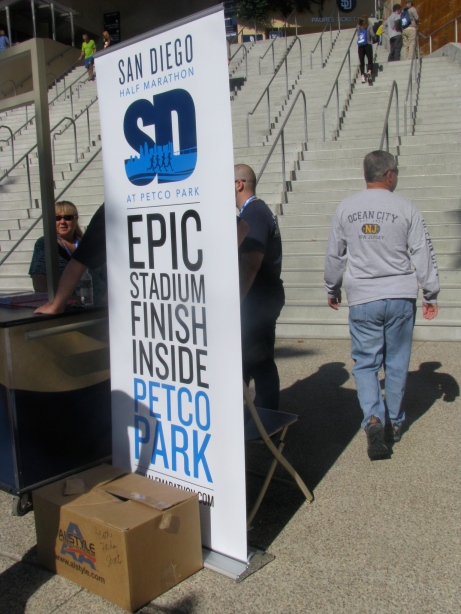 As I was getting my sample of Yonanas (the BOMB) I was staring at home plate. So AWESOME!

I was able to get my bib, bag and tech shirt within 5 minutes. The whole thing was very organized and not too crowded. I liked that!

The Inaugural San Diego Half Marathon was held on Sunday March 11, 2012. The early bird entry fee was $55. Late entry was $100. It was advertised as a fast course with an “Epic” finish inside of Petco Park. The race date for 2013 has not yet been announced.

There was free street parking that I took advantage of. I believe there was also lot parking, however, I do not know if there was charge. 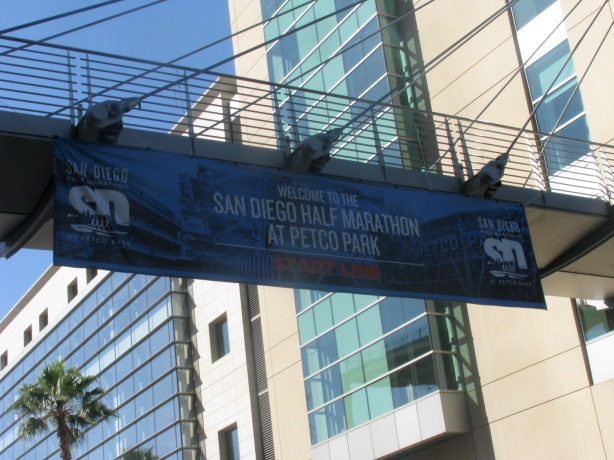 The start was organized by waves. While the corrals were roped off it did not seem like they were being enforced. There were several portapotties close to Wave 3 and again close to Wave 6. The lines were long but seemed to be moving. I opted to use a hotel lobby bathroom that had no wait and hand sanitizer.

I saw a bag check that was not crowded and appeared to be running smoothly. However, I did not check a bag so others may want to chime in.

The first 8 miles of this course were fast and flat through downtown SD, Harbor Drive and Point Loma. There was a short, steep uphill at mile 8 and then a long climb that started around at 8.5. The uphill continued into Hillcrest through mile 10 and then the awesome downhill started from 10.5 to the finish. The last 2.6 miles were AWESOMELY FAST. Like I wish every race had this type of finish. It definitely put the wind back in my sails after a tough climb!

I really liked this course and had no problems with crowding. I did hear that some runners got stuck at a train crossing at some point on the course. I am not sure if that’s the case and if so that’s kind of a bummer.

There were several aid stations on the course with marked signs advising runners of the distance between each station (really cool!). If I remember right they were about every 2 miles or so. Each station had water and an electrolyte drink and there was a GU station right before the big hill. The volunteers were so kind and supportive and kept the area litter free. This was the first the race in a long time that I wasn’t doing hurdles or getting lost in a wasteland of cups. 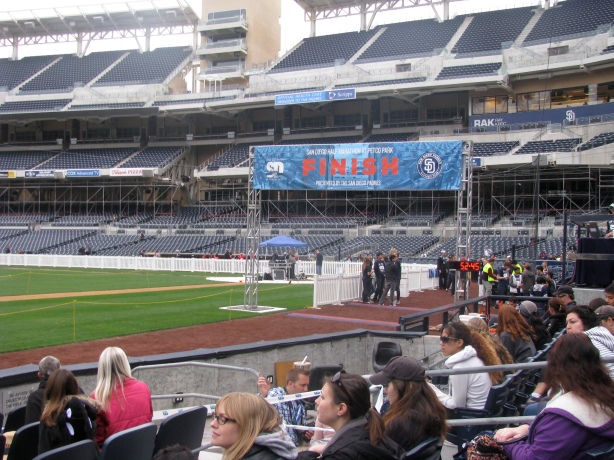 The race ended inside of Petco Park. It was so freaking awesome to be running down the foul line highfiving people sitting in the stands on the 3rd base side cheering on the runners.

After crossing the finish line there was water and tons of supporters (including the race director Susan Briggs) congratulating runners on a great race. Runners then had kind of a long walk through the outfield and back into the stadium where there was bananas, water, coconut water, granola, some kind of fancy energy water and massage tables. I felt like there was a lot of little freebies which was nice.

The only thing that could have improved the finish was mylar blankets. It was a cool morning (in the 50s) and the long walk made for some very cold peeps. I brought a change of clothes but would have appreciated a blanket for warmth until I could complete my quick change. 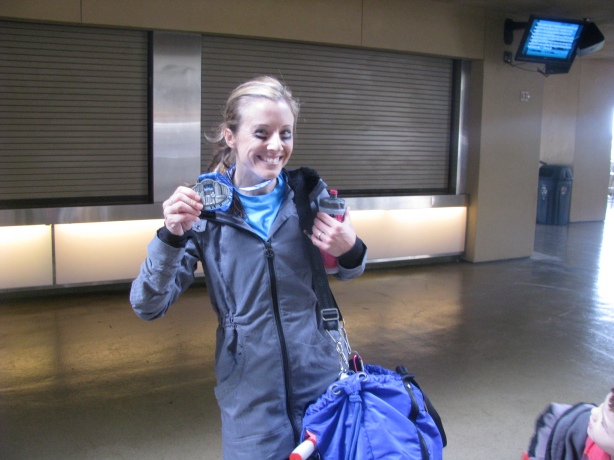 All of the vendor booths from the expo were there giving away stuff. In addition there was an “Inflataworld” set up in the outfield for kids. There were jumpies, bounce houses, obstacle courses, etc. There were several speakers (Meb! and pastor Miles McPherson from the Rock Church) and Lifehouse was the headliner.

Food and drink were for sale and the atmosphere was a lot of fun! 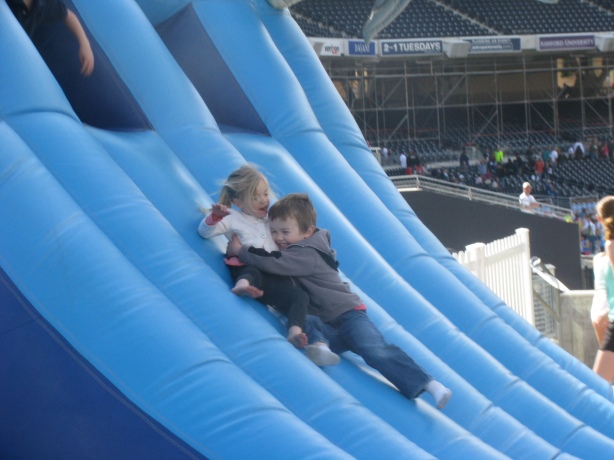 Overall I thought this was a great race. It was organized, the volunteers were great and ending inside Petco Park was freaking RAD. I will definitely be back to run this next year.

* Get to the expo early. Dealing with downtown traffic/parking on a Saturday afternoon can get cray.

* Park on the street on race day morning. It’s FREE and you will not have to deal with parking lot madness post race

* Bring a change of clothes. The weather in March is usually cool and can be rainy.

* Enjoy the post race fun. This is a family friendly event with a TON for the kids to do. My kids said this was the best race they had ever been to.

As we approach Spring/Summer (remember when we used to get 3 months off?!) it’s time to get ready for warm weather and, well, less clothes. While I do not like to parade around in skimpy outfits I want to feel confident and healthy. Ladies, ya feel me? The neon lighting in dressing rooms often makes me want to cry.

It’s a misconception that if someone is a runner/athlete that person can eat whatever whenever and not gain an ounce. WRONG! Eating right while staying active is key.

In my next post let’s discuss good eats, running and some strength training/crosstraining options that keep me strong and fit.

17 thoughts on “SD Half Expo, Race Review and Gettin’ Fit For Summer”