Happy Tuesday peeps. After being up almost all night last night with some sort of crazy tummy bug I am feeling a little rummy. The good news is I feel fine today (woohoo). The bad news is I am crazy tired. I am talking so tired that I can hardly drink my coffee. You all know I love coffee. What a bummer.

Time to play catch up. Let’s dive right in!

I finally got to run with the Rock Runners and Triathletes! It’s been a few weeks since I have been able to do so and it just felt good to be surrounded with friends again. There was a huge turn out and the weather was beautiful. I was able to get 8 miles in but my hip was still being funky. A couple of ladies that run with us are PT’s and both took a look at my hips/glutes after we were done running. They both concurred that it looked like my hips were out. Left hip weaker than right but that something just didn’t look right when I was walking. They gave me a few exercises to try out and said if they didn’t work a hip adjustment would. It made sense to me as I told my hubs a week or so ago that it almost felt like my hip/femur was out of the socket. I knew it couldn’t be as I wouldn’t be able to walk but that was what it felt like. The soreness radiated in my low back/glute but mostly right there in my hip!

After my eval we headed 45 min north to my parents house to hang with the fam. We figured it would be easier to drive up Saturday and stay the night so that we would be there Sunday to kick off the football festivities early. FUNNNNNN.

Woke up and did a very hilly 5 mile walk with my Mom and Sis-in-law. It was another gorgeous day. It even felt hot. Seriously, this has been a crazy warm winter. I am not complaining, I just can’t remember the last time I could wear a tank top in January/Feb! Anyway, the miles went by so fast as we talked and just enjoyed each other’s company.

When I got back to my parent’s house I decided it was time to bust out a few of  my newly learned strengthening moves. I figured if nothing else I would get some strength training in and burn some calories before stuffing my face with delicious football food. Routine included wall leg lifts (toes pointed up) and clams. I did 4 sets on each side and called it a day. It was time for football! My brother (and SIL and nephews) live directly across the street from my parents so we headed over for the par-tay.

My brother is a HUGE Patriot’s fan so this was a big deal for him. I’m talking he didn’t sleep the night before. Not kidding. That’s hardcore right there. Tom Brady should show him some love. 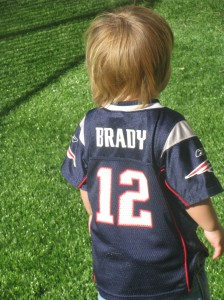 I think there ended up being about 30 people at his house to watch the game. It was a lot of fun and there was a lot of food. Madonna at half time? Ehhhh. Not near as awesome as watching this happen 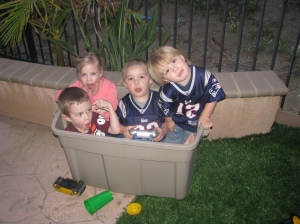 4 kids in a container. They win. These guys are best friends. Forever. I want to see them try this in 10 years!

After the game was over (and my bro had time to go off about how poorly the Pat’s played (true)) we headed 45 minutes south back to our casa. I did a few more hip stretches and hit the hay….

and then awesomeness happened…

I woke up, stepped out of bed and.. NO HIP PAIN. None. I thought it was a fluke but I suited up and headed out for a run.

WHERE WERE THESE MOVES 3 WEEKS AGO?!?

I took a rest day today since I was up all night so I am hoping for another great run manana. We shall see.

Tonight I am going to an event that’s going to involve a lot of run talk. Friends, food and running? AWESOME.

12 thoughts on “Time to ketchup. I mean catch up. Whatever.”